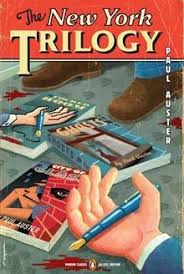 Stephen Schiff in The New York Times van 4 januari 1987: ‘The quirky richness of Paul Auster’s Locked Room took me by surprise. This is the final volume in his New York Trilogy, and the first two, City of Glass and Ghosts, left a sour, medicinal taste, as if I had swallowed something terribly good for me but not very toothsome. Widely lauded as postmodern and postexistentialist and post a few other things, these two slender novels turn the detective genre into something tonier: the gumshoes in their chilly pages keep meeting doppelgangers and spitting out references to Don Quixote and Hawthorne and Thoreau. And the more they stalk their eccentric quarry, the more they seem actually to be stalking the Big Questions – the implications of authorship, the enigmas of epistemology, the veils and masks of language.’ Ik ben het niet helemaal met Schiff eens, maar in zijn recensie (hier terug te lezen) beschrijft hij wel mooi hoe Auster een sprong maakt richting de ‘echte’ literatuur. Of die sprong altijd even succesvol is geweest (in literaire zin) valt, helaas, te bezien. Een fragment uit deel 1 (City of glass) staat hier. Een fragment uit Ghosts daar. Hieronder een fragment uit The locked room:

Several days went by before I found the courage to open the suitcases. I finished the article I was working on, I went to the movies, I accepted invitations I normally would have turned down. These tactics did not fool me, however. Too much depended on my response, and the possibility of being disappointed was something I did not want to face. There was no difference in my mind between giving the order to destroy Fanshawe’s work and killing him with my own hands. I had been given the power to obliterate, to steal a body from its grave and tear it to pieces. It was an intolerable position to be in, and I wanted no part of it. As long as I left the suitcases untouched, my conscience would be spared. On the other hand, I had made a promise, and I knew that I could not delay forever. It was just at this point (gearing myself up, getting ready to do it) that a new dread took hold of me. If I did not want Fanshawe’s work to be bad, I discovered, I also did not want it to be good. This is a difficult feeling for me to explain. Old rivalries no doubt had something to do with it, a desire not to be humbled by Fanshawe’s brilliance—but there was also a feeling of being trapped. I had given my word. Once I opened the suitcases, I would become Fanshawe’s spokesman—and I would go on speaking for him, whether I liked it or not. Both possibilities frightened me. To issue a death sentence was bad enough, but working for a dead man hardly seemed better. For several days I moved back and forth between these fears, unable to decide which one was worse. In the end, of course, I did open the suitcases. But by then it probably had less to do with Fanshawe than it did with Sophie. I wanted to see her again, and the sooner I got to work, the sooner I would have a reason to call her.
I am not planning to go into any details here. By now, everyone knows what Fanshawe’s work is like. It has been read and discussed, there have been articles and studies, it has become public property. If there is anything to be said, it is only that it took me no more than an hour or two to understand that my feelings were quite beside the point. To care about words, to have a stake in what is written, to believe in the power of books—this overwhelms the rest, and beside it one’s life becomes very small. I do not say this in order to congratulate myself or to put my actions in a better light. I was the first, but beyond that I see nothing to set me apart from anyone else. If Fanshawe’s work had been any less than it was, my role would have been different—more important, perhaps, more crucial to the outcome of the story. But as it was, I was no more than an invisible instrument. Something had happened, and short of denying it, short of pretending I had not opened the suitcases, it would go on happening, knocking down whatever was in front of it, moving with a momentum of its own.